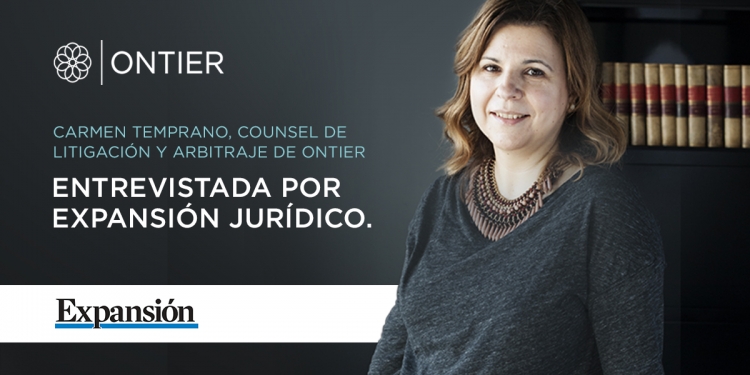 ONTIER’s Litigation and Arbitration Lawyer Carmen Temprano has participated in a report published by the newspaper Expansión in which, under the title 'What is a living will and what is it for', various issues related to inheritance law are analysed.

The article states that the recent organic law regulating euthanasia marks the beginning of a new stage in inheritance law, currently marked by the rise of contractual succession.

During the first months of the pandemic, legal professionals were experiencing an increase in the number of enquiries about how to proceed when making a will. In addition, the notarial function was seen as a public service and notarial acts were increasing in order to improve the solvency of citizens and companies. However, the excess mortality rate was not proportional to the number of wills.

In its annual report, the General Council of Notaries (CGN) has linked problems of restrictions, lower capacity and fear of contagion to a lower annual figure. And they mention that the number of wills is a lagging variable in relation to mortality.

Another aspect to bear in mind is that the entry into force of the law regulating euthanasia in June incorporates a key change in inheritance law. Knowing what happens to the estate after death or incapacity is neither obvious nor random. The allocation of assets should not give room for recriminatory behaviour or court cases of the legitimate heirs. That is why professional judgement is essential in the administration of wills.

The living will incorporates the so-called euthanasia context. In this way, the patient in a situation of incapacity states the medical treatment to be received, the destination of his body or organs. The document is received by the doctor or the professional team assisting the patient. It will only be valid if it has been drawn up in accordance with the legislation of the place where it has been granted and, therefore, the regulations of the autonomous community. Its aim is to ensure that when the patient loses his or her capacity to participate in decision-making, health care is provided as he or she wished.

This document is limited by the regulations in force and, once the law has been passed, the right to request and receive assistance in dying is recognised. Therefore, the living will is of paramount importance in order to apply for or exclude the provision of assistance in dying. If before the euthanasia law a living will was granted including the request for active euthanasia conditional on a hypothetical legalisation, as of June and now decriminalised, the request is already validated. The patient's representative or interlocutor with the healthcare team replaces the patient, is the interlocutor with the doctor and ensures that all the patient's instructions are complied with.

Carmen Temprano, when asked about the figure of disinheritance, clarifies in the article that this 'deprives a heir of its legitimate part of the goods and rights that the testator must reserve for them'. As causes for disinheritance, the Civil Code contemplates cases such as 'denial of food, mistreatment by deed or serious verbal abuse, loss of parental authority, commission of crimes such as physical or psychological violence in the family environment, forcing or threatening to prevent the testator from making a will or changing it.'

The testator may disinherit one of his children, increasing his share of the reserved portion to the rest or to all his children. However, the territories under regional or special law may establish their own rules on disinheritance. According to Carmen Temprano, 'Navarre's regional law allows the testator to freely dispose of his or her estate, as well as the Fuero de Ayala (territories of the Basque Country), in which the principle of absolute freedom to testate governs, so that disinheritance has no practical effect.'

The full article is available here