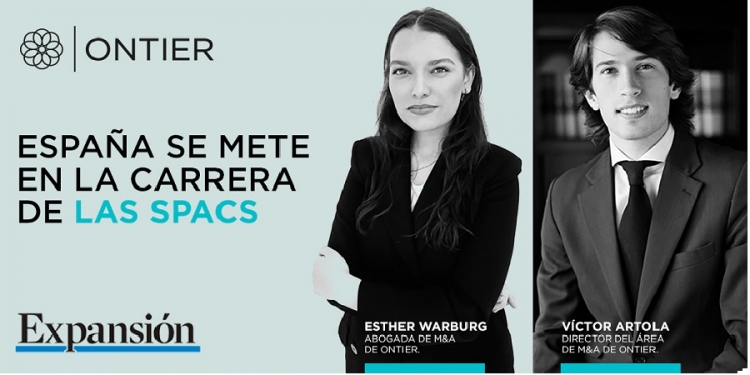 New Article by Víctor Artola and Esther Warburg for Expansión

Víctor Artola, lawyer in the Corporate and M&A Department, and Esther Warburg, an intern in the same area, have written a timely and accurate article in Expansión about the regulation of SPACs in Spain.

The authors say that, following the announcement by the British FCA (Financial Conduct Authority) on 30 April of its intention to promote the incorporation of this type of vehicle, the Spanish Ministry of Economy has reacted with the publication of the Draft Bill of the Securities Market and Investment Services Act (ALMV), which expressly regulates SPACs for the first time in Spanish legislation.

They also point out that 'without a doubt, the European race has only just begun and, so far, Amsterdam boasts an advantage both in terms of its experience (more than 40 projects listed on Euronext and with SPACs already listed) and its regulation.'

Regarding the definition of the SPAC (article 535bis), ONTIER's lawyers have several questions regarding issues such as the absence of any reference to the duration of this type of vehicle (sponsors usually have a period of around 24 months to find a target company) and the obligation to tie up the funds obtained through the IPO (capital raised by the sponsors) in a bank account,  and indicate that 'it is necessary to make a difference between the funds to be tied up and the funds necessary for the survival of the SPAC until it finds a target company (IPO expenses, diligence, advisers, etc.), which are generally charged at the cost of the SPAC's own capital. .), which are generally paid for with the founder warrants paid by the sponsors.'

Víctor Artola and Esther Warburg note that 'the suggested mechanisms undoubtedly generate additional questions, such as the creditor protection regime in a capital reduction or the applicability of these mechanisms in the event that no target company is found, and it will even be necessary to ask other questions such as, for example, whether it is necessary for the merger carried out by a SPAC to apply the right of opposition of creditors inherent to any merger'.

The article concludes by asking about the time needed to set up a SPAC, stating that 'it will be essential that this issue is addressed in order to encourage the formation of SPACs through an IPO process that does not take too long.'

The full article is available here